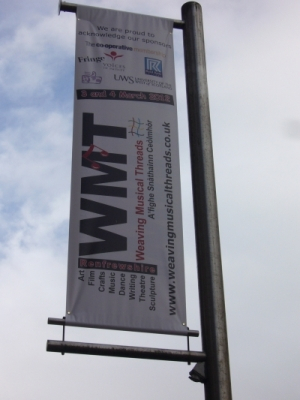 Celebrate Renfrewshire!  Its people...its history...its place in the world!

Enjoy a weekend showcasing the Arts.

Weaving Musical Threads is part of Music Nation, a countdown event of the London 2012 Festival, the finale of the Cultural Olympiad. Organised by the BBC and the London Organising Committee of the Olympic Games and Paralympic Games, it will see a spectacular weekend of music all around the UK on 3rd & 4th March 2012

Weaving Musical Threads is the only Making Music Nation project in Scotland. It offers the chance for the local creative community to work collaboratively towards this celebration weekend, developing cultural links across Renfrewshire and building the regions’ reputation with Renfrewshire and Scotland. A committee of volunteers is steering this event, making the most of the opportunity to promote Renfrewshire talent, weaving a tapestry of Arts with music as the thread which binds them.